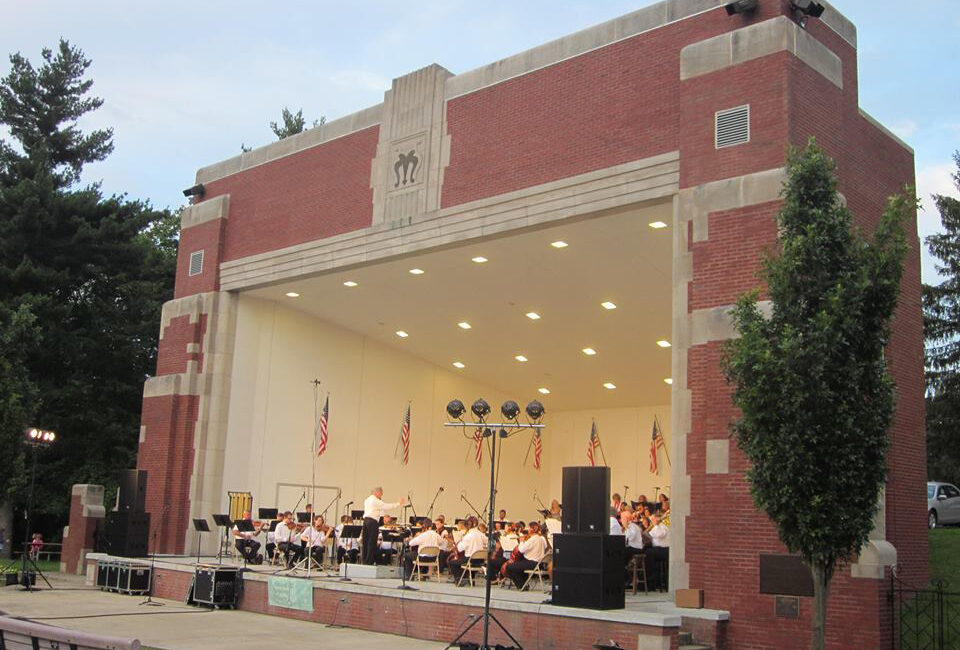 This grand facility was donated to the City of Ashland by Mrs. Kate Myers in Memory of her husband Guy Chase Myers. Following parking instructions is the story of the Band Shell’s creation.

By 1932, the park covered twenty acres with additional facilities for horseshoe pitching, softball and baseball diamonds, a lake with a casting platform, croquet courts, a children’s playground, archery, and bowling on the green. All of this was illuminated for night use.

In 1937, Mrs. Guy C. Myers purchased ten acres adjoining the park and presented the land to the city. Ten years later a plea by Dr. Louis E. Pete for a new band shell appeared in the local paper and was read by Mrs. Myers as she vacationed in Michigan. The following day a message reached Dr. Pete that Mrs. Myers would build the desired band shell as a memorial to her husband.

Designed to replace the old wooden band stand, the new shell would be 110 feet high and 90 feet wide to accommodate a 100-piece band, orchestra, or choir on its stage, 65 seats in the orchestra pit and 3,000 seats in its amphitheatre. The shell was designed by Hahn and Hayes, architects from Toledo; W.C. Forbes as general contractor; Jay Patterson, electrician; H.C. Wheeler seating and concrete; and D.D. Quinn landscaping.

The official dedication occurred in the third week of June, 1949, with three evenings of ceremonies and concerts by bands and choirs.