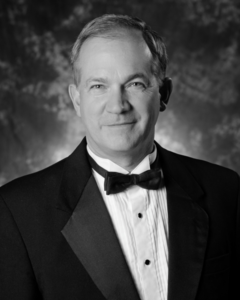 Dr. Rowland (“Ron”) Blackley is Professor of Music and Director of Choral Activities at Ashland University (Ohio), where he conducts the University Choir and Chamber Singers. He supervises all aspects of the choral program, serves as Coordinator of Music Education, and teaches in the areas of conducting and music education. While he has worked largely with choral groups, Dr. Blackley has conducted numerous orchestras and bands, including the Ashland Symphony, throughout his career. He has served as conductor and music director for several AU theatrical productions. Prior to his appointment at Ashland University, Ron taught and conducted at the Oberlin College Conservatory of Music, Lindsey Wilson College, Kent State University, and at high schools in Ohio and Colorado. He has led choirs on several domestic and international tours.

A graduate of Concordia College, New York, Blackley received his Master of Music degree from Kent State University and his Doctor of Musical Arts degree in Choral Music from the University of Colorado at Boulder. Ron is an accomplished organist and an Associate of the American Guild of Organists, currently serving Peace Evangelical Lutheran Church, Ashland, Ohio. He is a member of the National Association for Music Education, the Dalcroze Society of America, and a life member of the American Choral Directors Association. He is a popular clinician (choral and church music) and adjudicator (vocal, choral, piano), and has over thirtyfive choral compositions published.