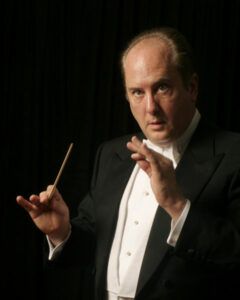 Now in his eighteenth season as Music Director of Ohio’s Springfield Symphony Orchestra, Peter Stafford Wilson is one of the most exciting and talked about conductors of his generation. Concurrently, he holds the post of Music Director of the Westerville Symphony and fulfills his eighth season as Principal Conductor of Tulsa Ballet, leading three productions, including the annual holiday performances of Tchaikovsky’s ​The Nutcracker​, with choreography by Artistic Director Marcello Angelini. He is also honored to lead the Opening Night program of the Ashland Symphony Orchestra’s 50th Anniversary Season.

Peter Stafford Wilson’s leadership of the Springfield Symphony Orchestra continues to elicit praise from the public, musicians, and press. Its 2005 ​Agriculture and the Arts Growing Together brought international attention to the organization, as did the sequel, ​American Made: Celebrating Our Manufacturing Heritage​, which premiered in November 2007. The orchestra’s innovative series, “Night Lights,” has enjoyed steadily increasing sales and attendance. The recent endowment of the Music Director chair with gifts totaling one million dollars is further testimony to the community’s expanding support. Mr. Wilson and the SSO are the recipients of a 2009-2010 ASCAP Award for Adventurous Programming.

From 1990 to 2018, Peter Stafford Wilson held the posts of Assistant and Associate Conductor of The Columbus Symphony Orchestra. At the conclusion of his tenure, he was honored with the CSO’s “George Hardesty Award for Leadership.” While in Columbus, his duties included the leadership of the orchestra’s nationally recognized educational projects, which have been featured at national conferences of the American Symphony Orchestra League and Music Educators National Conference. He led programs on all of the orchestra’s classical and Pops subscription series, and played a major role in its 1997 ​Viva Vienna Festival​. Subsequently, he was named Artistic Director of the orchestra’s ​Festival Weeks @ The Southern​, for which his innovative programming was consistently praised. He is the recipient of a 2010 Columbus Symphony Orchestra Music Education Award, given in recognition of his 20 years of dedication to the orchestra’s educational programming, as well as a 2017 Columbus City Schools’ Outstanding Leadership Award and a Greater Columbus Arts Council Community Arts Partnership Educator Award. Mr. Wilson also served as Music Director of the Columbus Symphony Youth Orchestra, which he regularly led in local and regional concerts. The CSYO has performed at the national conferences of the ASOL and MENC and at the 1998 International Youth Orchestra Festival in Banff, Alberta. In the summer of 1999, he and the CSYO toured Austria, the Czech Republic, and Germany. During the summer of 2005, Mr. Wilson led the CSYO on a highly acclaimed tour of The People’s Republic of China, playing to capacity audiences in Beijing, Hefei, Hong Kong, and Shanghai, as well as in an historic performance atop the Great Wall of China. He also conducted the CSYO in two programs at New York City’s famed Carnegie Hall, most recently in 2018.

A native of North Carolina, Peter Stafford Wilson studied at the University of Cincinnati’s College-Conservatory of Music, where his primary mentor was the late Thomas Schippers. During his years at CCM, he became a leading exponent of contemporary music, often collaborating with faculty and student composers, including the Conservatory’s Visiting Professor of Composition, Lukas Foss. Mr. Wilson also studied at the Aspen Music School, where he studied with Dennis Russell Davies, Eastern Music Festival (on whose faculty he subsequently served), Pierre Monteux School, Boris Goldovsky Summer Opera Institute, and Rome’s Accademia Nazionale di Santa Cecilia, where he was associated with Franco Ferrara. After his advanced studies, he was appointed Assistant, and later Associate, Conductor of the Canton Symphony Orchestra. The Cincinnati Symphony Orchestra appointed him Regional Pops Conductor for the 1995 summer season, during which he led the orchestra in a series of widely acclaimed performances in Ohio, Indiana and Kentucky. Mr. Wilson also enjoyed a multi-year artistic relationship with The Cleveland Orchestra, often serving as cover conductor for Severance Hall and Blossom Music Center events. In 1996, the American Symphony Orchestra League featured him in its Conductor Preview event, a program that encourages emerging conducting talents in the United States.

Peter Stafford Wilson and his wife, Barbara Karam Wilson, reside in Westerville, Ohio. When not conducting, he enjoys traveling, golf, and reading. He is also a wine enthusiast and an avid gourmet cook.