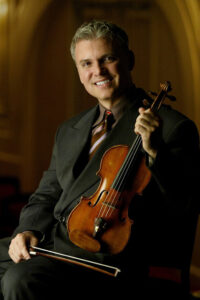 Concertmaster of the Saint Louis Symphony under Music Director David Robertson, David Halen is recognized as one of the most esteemed musical leaders of an American orchestra. In addition to his duties with the orchestra, in September, 2012 he joined the faculty at the University of Michigan, and has many successful students across the country. In summers, he is a concertmaster and violin faculty at the Aspen Music Festival and School in Colorado.

As a young man, he didn’t have to look far for his musical influences: he began playing the violin at the age of six, and earned his bachelor’s degree at the age of 18 studying with his father, the late Walter Halen. In that same year, he won the Music Teachers National Association Competition and was granted a Fulbright Scholarship for study at the Freiburg Hochschule für Musik in Germany, the youngest recipient ever to have been honored with this prestigious award. He served as Assistant Concertmaster with the Houston Symphony Orchestra under Sergiu Comissiona and Christoph Eschenbach between 1982-1991. He joined the St. Louis Symphony where he was officially named Concertmaster in September 1995, under Music Directors Leonard Slatkin and Hans Vonk. He has also soloed in most of the major concerti in St. Louis, taught, and served as Concertmaster at the Cincinnati Symphony, WDR (Cologne, Germany), San Francisco, Detroit, and Toronto Symphonies, the Manhattan School of Music, Indiana University, the Academy of the West in Santa Barbara, and the New World Symphony in Miami. In August, he is artistic director of the Missouri River Festival of the Arts in Boonville, Missouri. Halen plays on a Giovanni Battista Guadagnini violin, made in 1753. He also maintains a beautiful farmstead outside of Hamilton, Ohio.