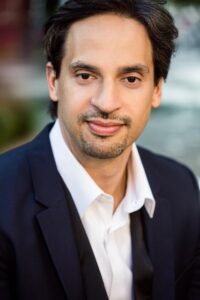 Dominican conductor and composer Darwin Aquino is rapidly gaining international attention and is regarded as among the most accomplished Latinx artists of his generation.

For the 2021-22 season, Darwin has been selected as conductor finalist for the Music Director position with the Ashland Symphony Orchestra, in Ohio, appointed as the new Music Director of the St. Louis Philharmonic Orchestra and Conductor of the Caribbean Lyric Festival. Additionally, he is a Finalist for the Erno Lanyi International Conducting Competition in Europe.

Lately, the Florida Grand Opera commissioned Darwin to translate into Spanish the Italian comic opera Il Matrimonio Segreto by Domenico Cimarosa, for their upcoming April 2022 premier. Having recently conducted Vincenzo Bellini’s monumental opera Norma with Winter Opera STL, the St. Louis Post-Dispatch remarked: “Darwin had the orchestra sounding great from the first measures of the overture and maintained a good balance between stage and pit. He has a fine feel for the nuances of the bel canto style and knows to breathe with the singers”.

An opera conductor regarded for his “passionate and precise baton”, Darwin has received outstanding reviews and public praise for his interpretations of Verdi’s Il Trovatore, Bizet’s Carmen, Gershwin’s Porgy and Bess, Rossini’s L’Italiana in Algeri, Donizetti’s Elisir D’Amore, Bizet’s Pearl Fishers, Menotti’s The Medium, Chabrier’s L’Etoile, among many others. He served as Music Director for Winter Opera St. Louis for the 2016-2019 seasons. Early in his career was appointed Cover Conductor at the Florida Grand Opera (Don Pasquale, Carmen, Norma, Barber of Seville) and Opera Naples (La Boheme).

As a composer, Darwin’s most celebrated orchestral composition, Espacio Ritual, had its European premiere by the Orchestre Philharmonique de Radio France during the Festival Presences, resulting in glowing praise from La Musique au Jour le Jour: “Aquino has very well listened to the French composers, Boulez or Varese, developing in this piece a deeply personal language and an inventive mastery for writing to the orchestra”.

As a passionate advocate of social change through classical music, Darwin worked closely for many years with Gustavo Dudamel in Venezuela and previously held posts as Artistic Director of El Sistema, Director of the National Conservatory of Music and Music Director of the National Youth Symphony Orchestra, in his homeland the Dominican Republic. Maestro Jose Antonio Abreu, founder of the world-known Venezuelan Sistema, referred to Darwin as “a great conductor, excellent composer and eminent violinist. A pioneer for classical music”.

Currently, he also serves as Conductor-in-Residence for the Washington University and Music Director of the Gateway Festival Orchestra. In his country, he has been the Music Director for the Música Sacra concert series since 2011. Recently, he was selected by the St. Louis Symphony Orchestra as Cover Conductor for maestro Leonard Slatkin and Gemma New.